the
​student book club that shall remain unnamed 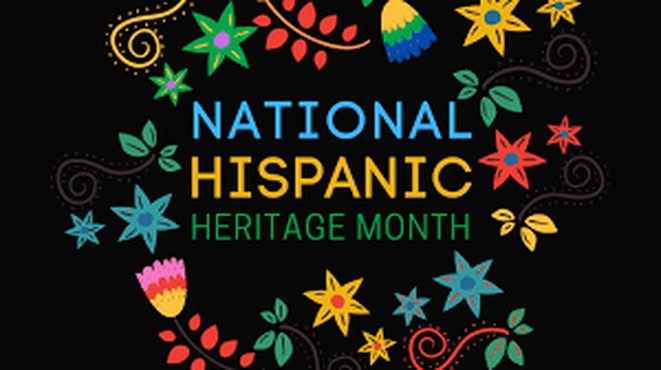 “Each year, Americans observe National Hispanic Heritage Month from September 15 to October 15, by celebrating the histories, cultures and contributions of American citizens whose ancestors came from Spain, Mexico, the Caribbean and Central and South America.
“The observation started in 1968 as Hispanic Heritage Week under President Lyndon Johnson and was expanded by President Ronald Reagan in 1988 to cover a 30-day period starting on September 15 and ending on October 15. It was enacted into law on August 17, 1988, on the approval of Public Law 100-402.
“The day of September 15 is significant because it is the anniversary of independence for Latin American countries Costa Rica, El Salvador, Guatemala, Honduras and Nicaragua. In addition, Mexico and Chile celebrate their independence days on September 16 and September18, respectively. Also, Columbus Day or Día de la Raza, which is October 12, falls within this 30 day period.”
​From hispanicheritagemonth.gov

We believe celebrating and learning more about cultural diversity strengthens the educational experience we provide our school community. Our goal is to create a daily practice which includes curricular contributions from a variety of cultures, beliefs, and traditions. The NKMS library contains outstanding books by Hispanic authors and about the Latinx experience. These titles are available all year long, but are promoted and highlighted during Hispanic Heritage month. A few are featured here: click each and read a review.

Each subject area will recognize Hispanic Heritage Month in creative ways related to curriculum; and, all NKMS students can sign up to participate in optional HIspanic Heritage month activities by clicking the link below.

Hi there! I'm Mrs. Mordica, the friendly NKMS librarian. If you have a question, suggestion, or just want to say "hey," email me :)
Literary Awards and Booklists
If you are interested in reading books selected by experts in the fields of children’s and young adult literature for their high literary quality, you might want to look at the archives for major national literary awards.
Many of the organizations that sponsor these awards also sponsor others, including special ones for non-fiction, audiobooks, graphic novels, and books by or about minority groups or social justice issues. Clicking on the links will also allow you to search their websites for other prestigious awards.

The NKMS library engages with the New Kent community training confident researchers, critical thinkers, enthusiastic readers, and ethical participants in the contemporary information landscape; we provide quality resources for both academic and personal endeavors while collaborating with faculty members and the New Kent community to enhance instruction.
Powered by